Continuing the discussion through abstraction level 4 in the last post, we look at level 5 and level 6 in this post.

We are going to build the Von Neumann Architecture that is capable of executing any program. 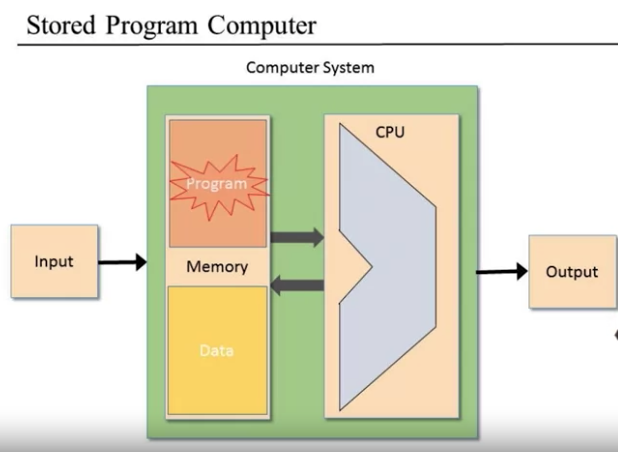 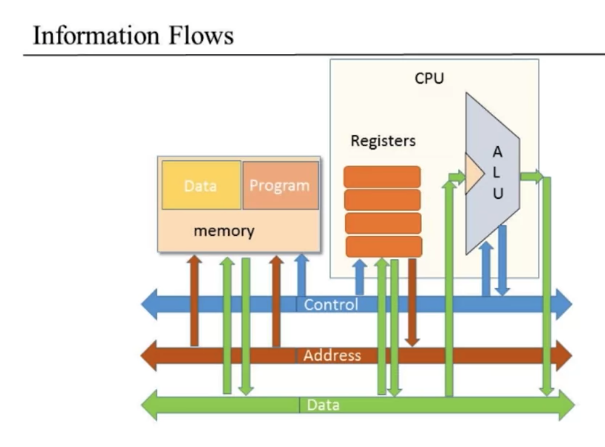 The CPU has ALUs and registers. The ALUs do the arithmetic and logical operations.

The memory holds the data and the program.

To move data around, there are 3 kinds of buses: the data bus, address bus, and control bus (or control wires).

The ALU loads information from the Data bus and manipulates it using the Control bits.

All that the CPU does is fetch an instruction and execute it, and repeat. This is the CPU loop. 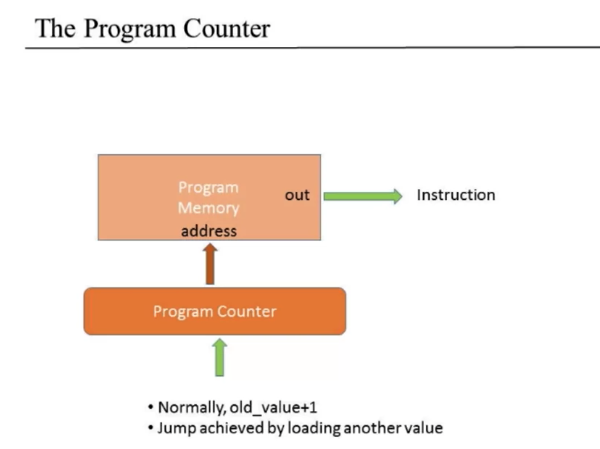 In the execute cycle, we use the bits from the control bus and access the registers and/or the data memory to manipulate the data.

There is clash between fetch and execute because they access the program and data memory which are in the same physical memory. Usually, we use a multiplexor to do the fetch cycle first and remember the content of the instruction in the register, and then access the data memory. There’s a variant of the Von Neumann Architecture which is the Harvard Architecture. It physically separate the program and data memory to avoid this complication.

The hack CPU is the brain of the computer, it decides which instruction to execute next and how. 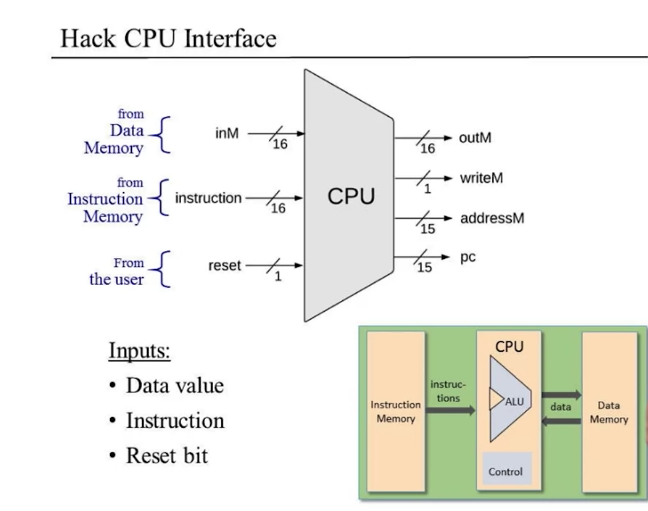 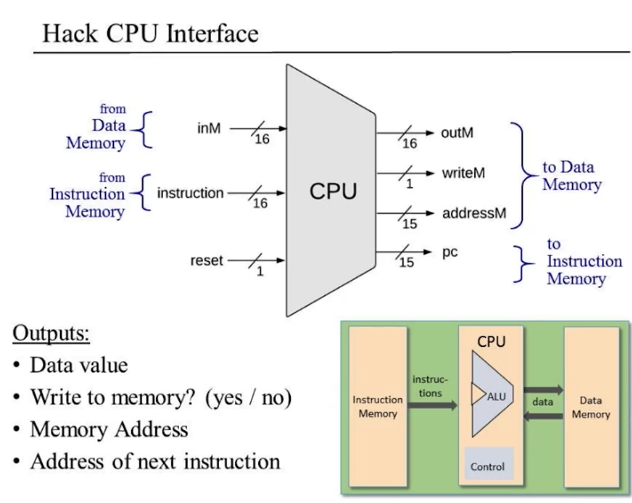 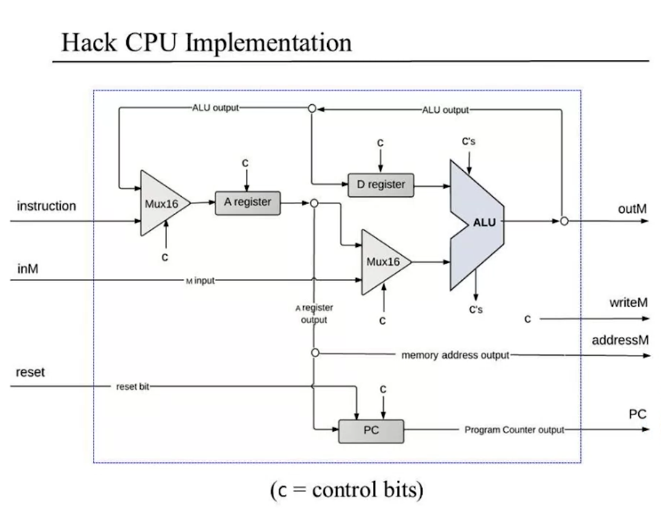 All the chips used are the ones we have built before. We just need to assemble them together in this way. The C bits are control bits.

Here is how the CPU recognizes and handles an A-instruction: 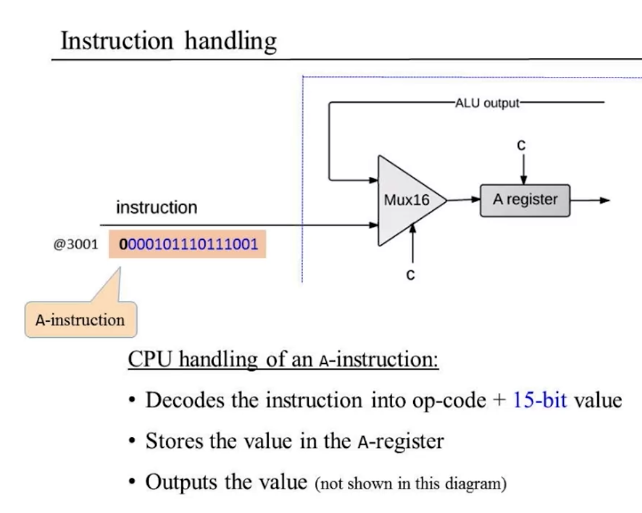 Here is how the CPU recognizes and handles a C-instruction: 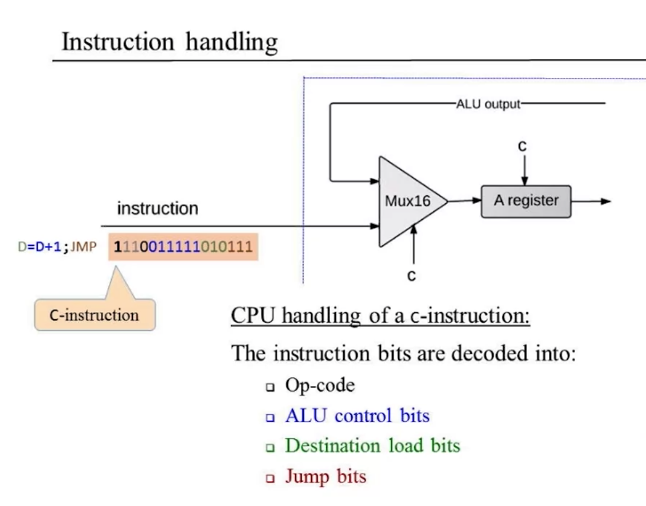 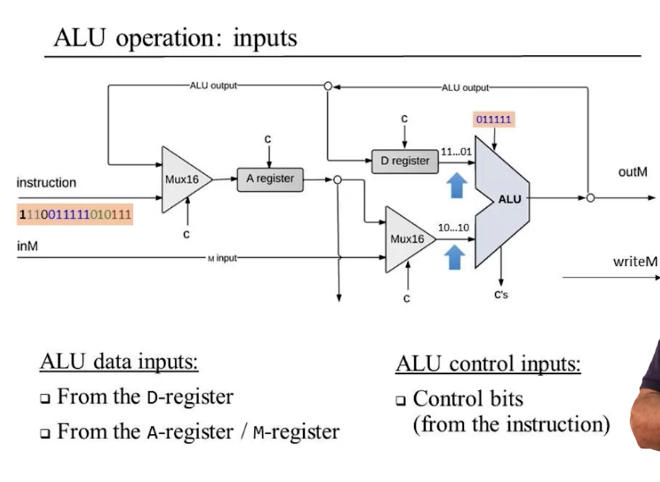 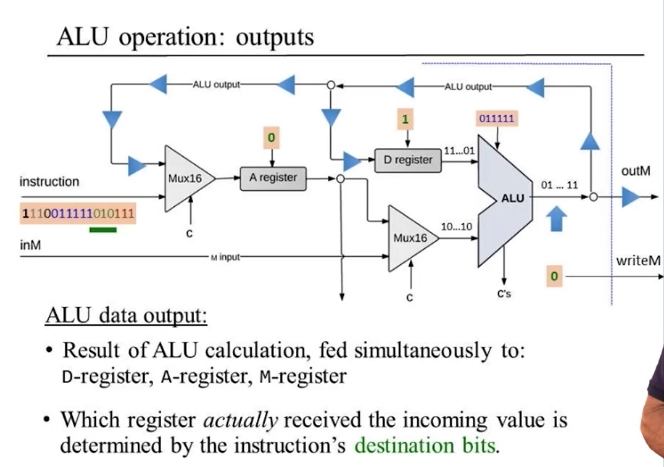 Here is the control implementation and program counter logic: 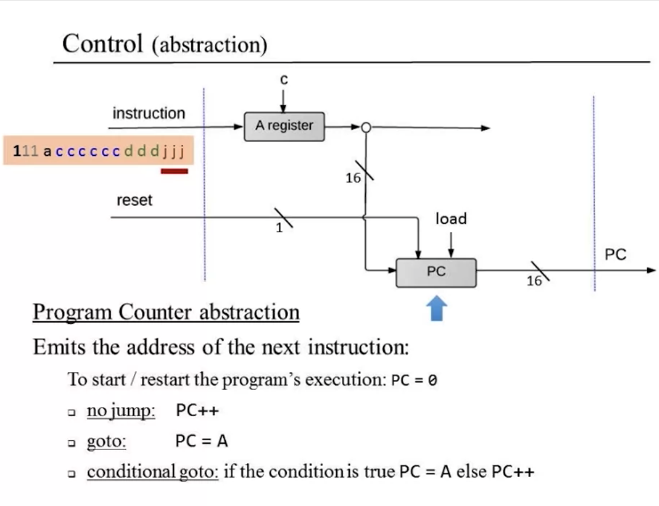 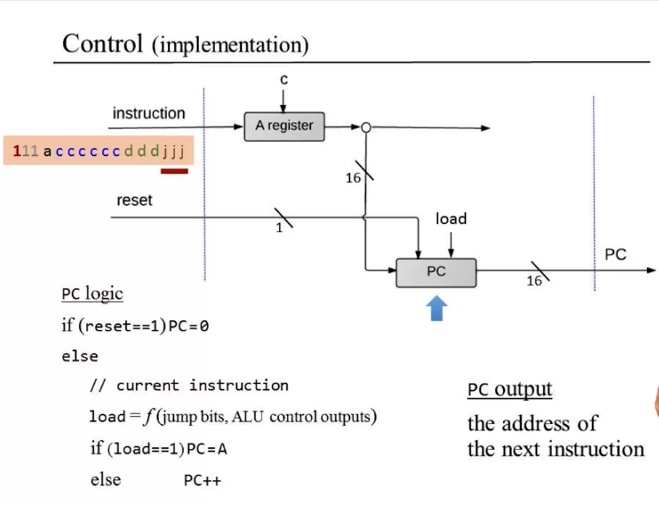 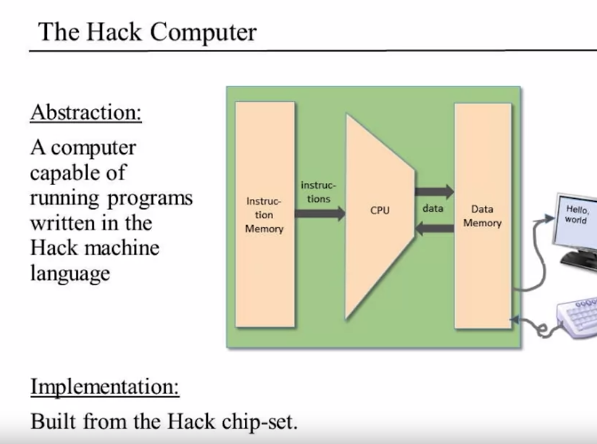 Now that we have the CPU implementation, we look at the memory. It has 3 parts: the RAM part that is the data memory, plus the Screen Memory Map, and the kernel memory map. 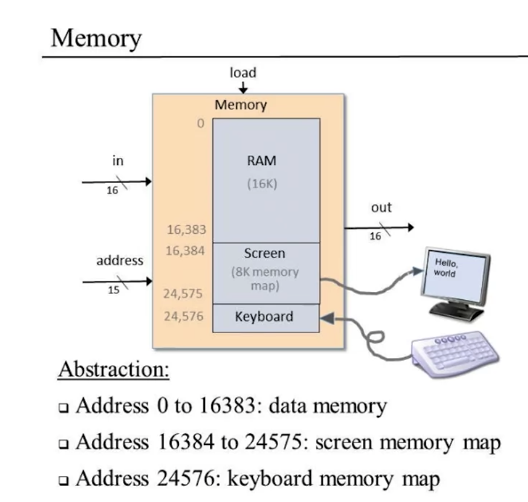 The fist part, RAM16, is already implemented in our previous sections.

We also went through Screen Memory Map and Keyboard Memory Map in detail before. One special feature of the Screen chip is that it can refresh the display at a frequency. 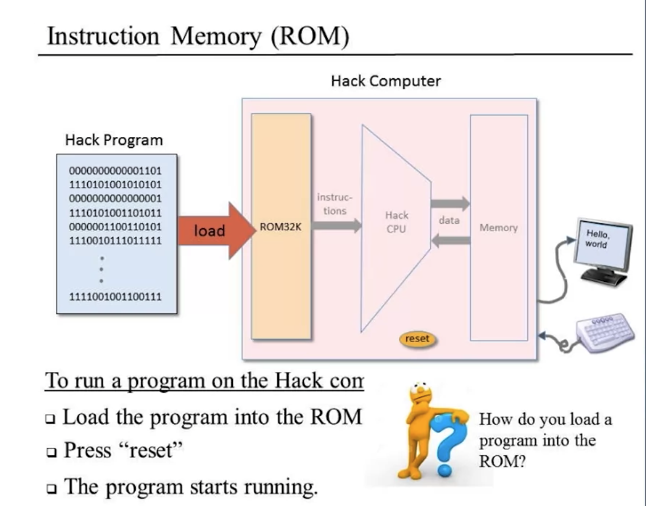 To put a program into ROM, there are 2 ways

Putting it all together 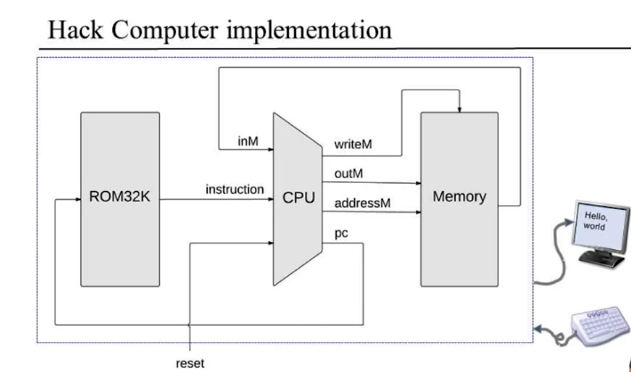 For the first time in this series, this part is software. The Assembler translates the machine language to binary code that can be executed. It is the first software layer above the hardware.

But where do we run the Assembler if it is not already in 0s and 1s itself?

Since we are not building the first computer in the world, we can write the Assembler on another computer, compile it down to binary, transfer the binary to the Hack computer we are building, and use the binary directly. 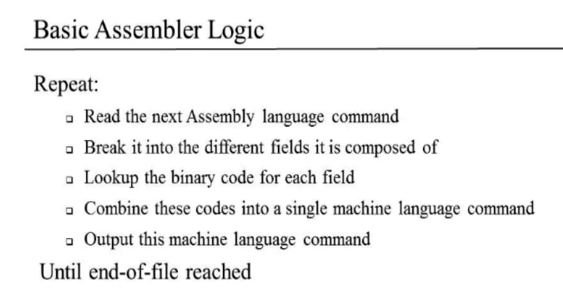 The Assembler reads a line of Hack code into an character array. It ignores comments and whitespaces when breaking down the line into fields.

The Assember also supports symbols (variable names). The way it supports that is to store the symbol name at an address.

Essentially, a symbol is just an alias for an address location.

It is possible in the Assembly (Hack) machine language that a “jump” symbol is used before it is declared using the @ operator. One solution is to do 2 passes for the code, the first pass builds the symbol table, and the second pass uses it to correctly executes the program. 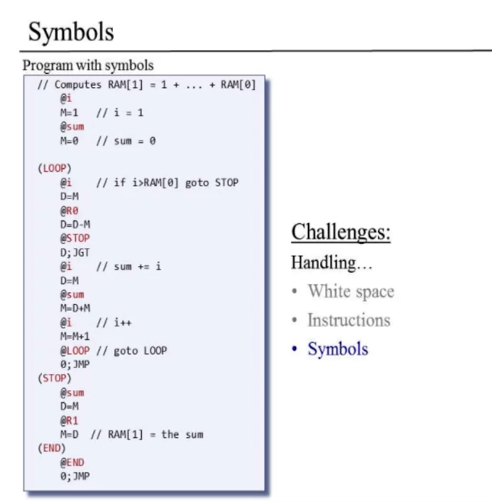 We have already seen the tables that map A and C instructions to binary code. Along with user symbols that are constructed by the declarations, we have all we need to do the translation.

We take care of

Let’s focus on them one by one. First we handle whitespaces for a simplified Hack program with no symbols.

This is the easiest one. We simply strip all whitespaces, so the program after this step has no whitespace.

An A-instruction is just @value. In binary, we prepend the op code 0 for A-instruction, and convert the value in decimal to binary, add 0 paddings accordingly. 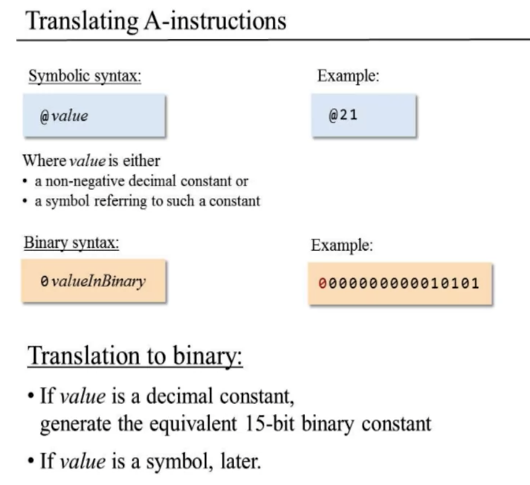 Consider MD=D+1. This C-instruction has a dest: MD and comp: D+1, with no jump field.

The binary syntax for C-instructions is

3 1s at the beginning, and fill in the a, c, d, j bits according to the table below 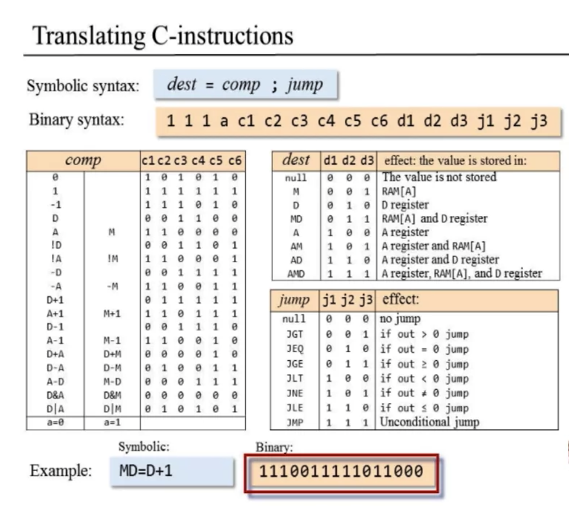 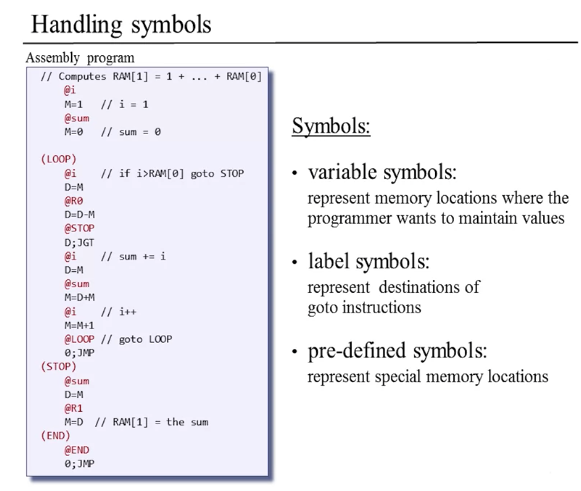 For pre-defined symbols, we can simply replace them with their values based on the table below 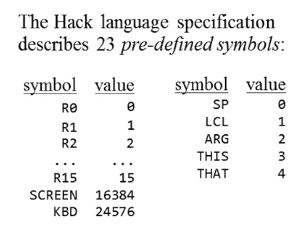 For the label symbols, they are used for jump commands.

When translating a label symbol, simply replace it with the value mem_index_of_next_instruction.

For the variable symbols, they are assigned to memory locations starting from address 16 (a designer’s decision).

We need a symbol table to keep track of the new and old variable symbols. It has key-value pairs of symbol name and symbol address.

The symbol table is initialized with all the predefined symbols and their addresses.

The symbol table is an auxilary data structure that the Assembler needs to process the program. Once the processing completes, the symbol table can be tossed away.

Keep in mind, the Assembler is just a text processor that takes in the Assembly/Hack language and returns a file containing only two types of characters, 0 and 1. These 0s and 1s are still ASCII characters. When the computer loads it into memory it then becomes real 0s and 1s.

Although we say we are not building the world’s first computer and resort to a high level language to write this Assembler text processor, all that matters is the resulting translation directive text file. One can write it from scratch with hardware logic, but it’s cumbersome. It’s not that we are not able to produce this text processor without the help of a high level language. We already have all the logic we need. 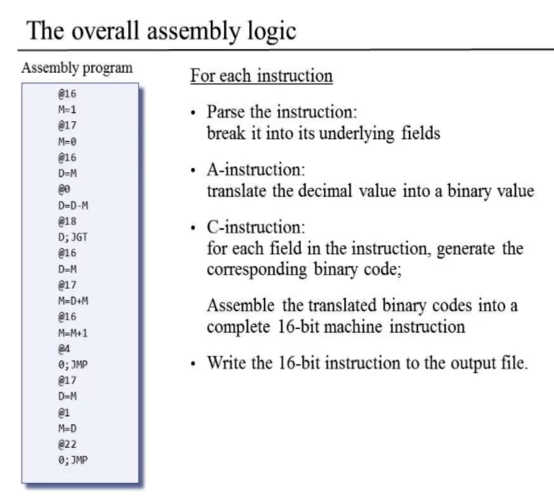 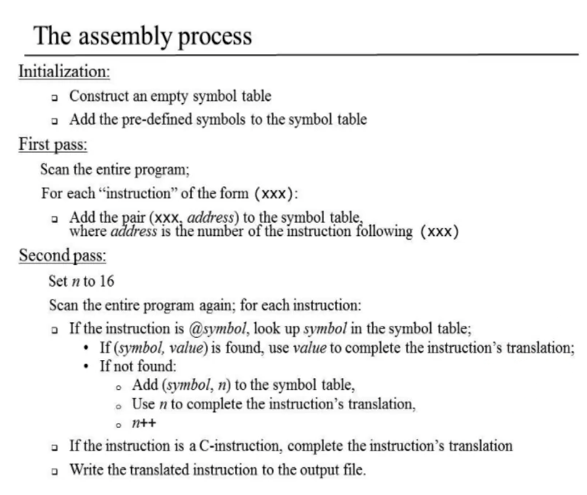 To implement the Assembler in a high level language like Python or Java, here’s the pseudocode: 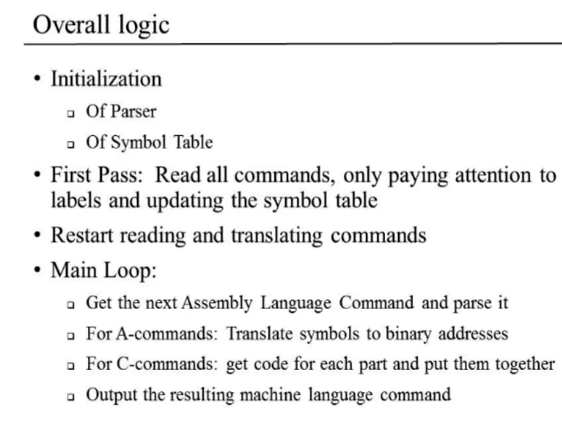 We can make the Hack language more user friendly by adding macro commands. For example, we can convert

To achieve this, simply add the translation logic into the Assembler.

How was the first Assembler created in history without the assistance of high level languages?

The first Assembler was built by hand. People write the binary code for the translation process. However, we only needed to do it once. Once it’s created, people can build on it and create new Assemblers by programming.

From NAND to TETRIS Part I: Last words

Now we have built the entire Hack computer from NAND gates!

Outside the classroom, it is rare that people need to work with the Assemly language. People only work with high level languages in programming unless they really need to optimize a piece of code for a specialized device.

The most important concept introduced here is that why computers are programmable and can do all kinds of tasks.

We bridged the gap from hardware to software. This is the key idea we learned!

In From NAND to TETRIS Part II, the material will cover the software layers such as the virtual machine, the compiler, operating system, etc.