In fastai, there is a difference between validation and test set. Test set doesn’t have label. Use validation set for model development. If you want to do inference on many things at a time and not one at a time, set the data as test instead of valid.

Tip: for data augmentation, MNIST can't have much transformation, you can't flip it because it changes the meaning of the number, you can't zoom because it's low res. The only transform is to add random padding. Do this transform on training set but not validation set.

If not using a pretrained model, don’t pass in stat in normalize() for databunch, it grabs a subset of the data at random and figures out how to normalize.

plot_multi(_plot, nrow, ncol, figsize=()) is a fastai function that plots multiple examples in a grid. Define _plot first for what to show.

Then we define the convolution function with fixed kernel size, stride and padding.

This is a model we built from scratch with a simple CNN architecture, it takes 12s to train on my GPU and got 98.8% accuracy! Already super good.

fastai has conv_layer so we can skip writing all the batch norm and relu’s.

It’s the same as previous code, just looks better. Train 10 epochs, we can get to 99%+ accuracy.

The residual block is a revolutionary technique in computer vision.

The residual block is

Trick: if an NN or GAN doesn't work so well, try replacing the conv layers with residual blocks!

Check out the fantastic paper Visualizing the Loss Landscape. This is 3 years later since ResNet, and people started to realize why it worked. With the skip connections, the loss landscape is much smoother.

The batch norm had the same story. This reminds us innovation usually comes from intuition. Intuition comes first, people realize what’s going on and why it works much later. 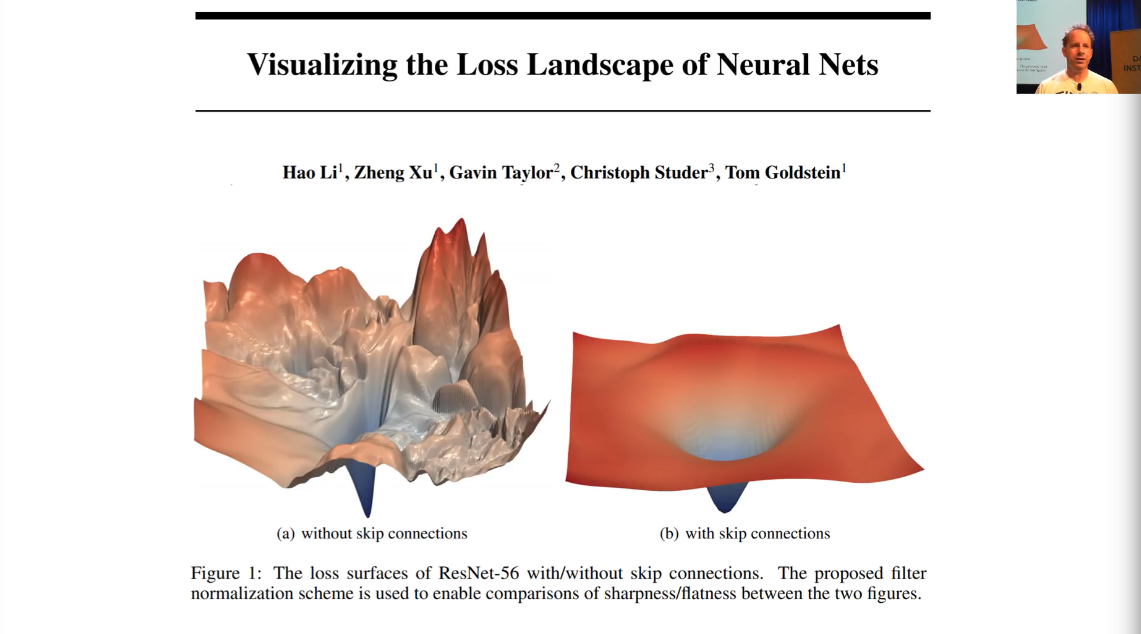 fastai has res_block. We add a res_block after every conv2 layer from previous code, we get

Tip: when you try out new architectures, keep refactor the code and reuse more to avoid mistakes.

Resnet is quite good and can reach SOTA accuracy for a lot of tasks. More modern techniques such as group convolutions don’t train as fast.

DenseNet is another architecture, its only difference from Resnet is that instead of a x + conv(conv(x)), it does concat(x, conv(conv(x))) (the channel gets a little bigger). It is called a DenseBlock instead of ResBlock. The paper of DenseNet seems complicated but it’s really very similar to Resnet.

DenseNet is very memory intensive because it maintains all previous features, BUT it has much fewer parameters. It works really well for small datasets.

Fantastic paper for convolution: A Guide to Convolution Arithmetic for Deep Learning

Nowadays we use a pretrained resnet34 as the encoder in U-net.

Trick: if you see two convs in a row, probably should use a resnet block instead. A skip connection with "+" or "concat" usually works great.

U-net came before resnet and densenet but it had a lot of the similar ideas and worked great for segmentation tasks.

Image Restoration with U-Net and GAN

We use the U-net architecture to train a super-resolution model. This is a model which can increase the resolution of a low-quality image. Our model won’t only increase resolution—it will also remove jpeg artifacts, and remove unwanted text watermarks.

In order to make our model produce high quality results, we need to create a custom loss function which incorporates feature loss (also known as perceptual loss), along with gram loss. These techniques can be used for many other types of image generation task, such as image colorization. 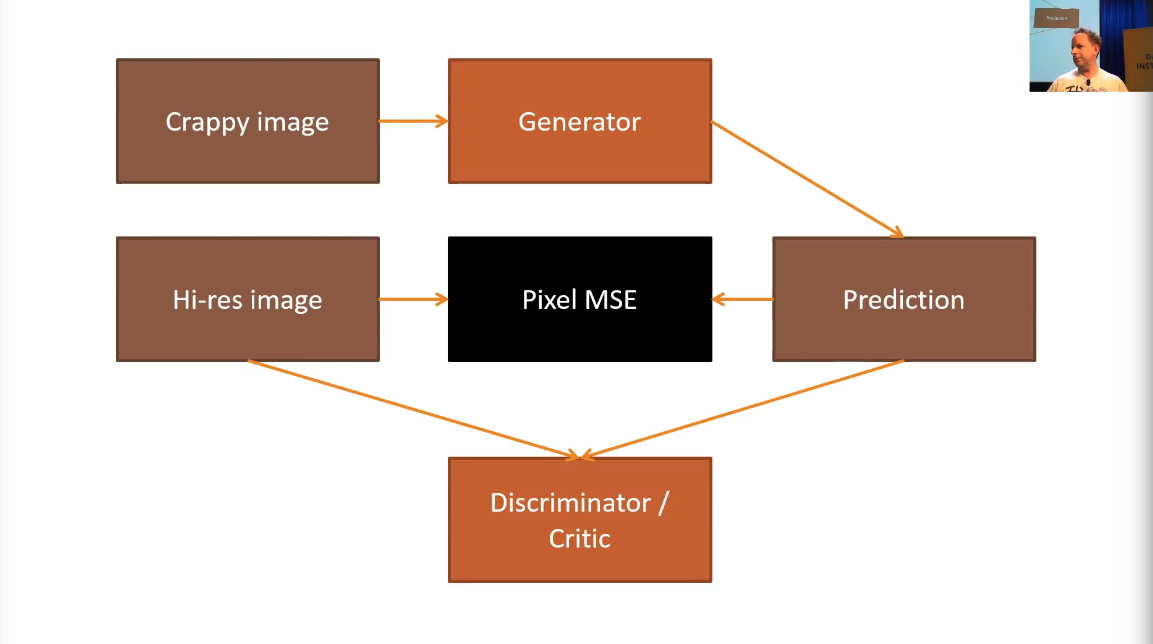 To train a fastai version GAN, we need two folders, one with high-res original images, one with generated images.

Trick: to free GPU memory without restarting notebook, run the code below.

Tip: for GAN, fastai's GANLearner figures out the back and forth training of the generator and the critic for us. Use the hyperparameters like this below.

Jeremy didn’t like the name “perceptual loss” and he named it “feature loss” in fastai library.

The paper’s idea is to compare the generated image with the target image using a new loss function, that is, the activation from a middle layer in an ImageNet pretrained VGG network. Use the two images and pass them through this network up to that layer and check the difference. The intuition for this is that, each pixel in that activation should be capturing some feature of ImageNet images, such as furriness, round shaped, has eyeballs, etc. If the two images agree on these features they should have small loss with this loss function. 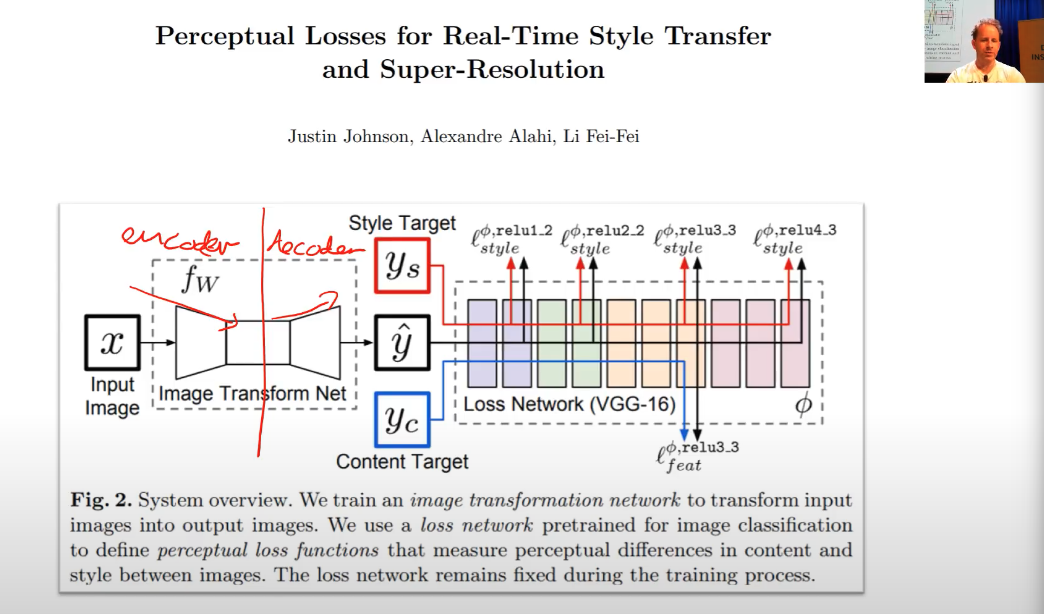 With 1 GPU and 1-2hr time, we can generate medium res images from low res images, or high res from medium res using this approach.

A fastai student Jason in 2018 cohort created the famous deOldify project. He crappified color images to black and white, and trained a GAN with feature loss to color 19th century images! 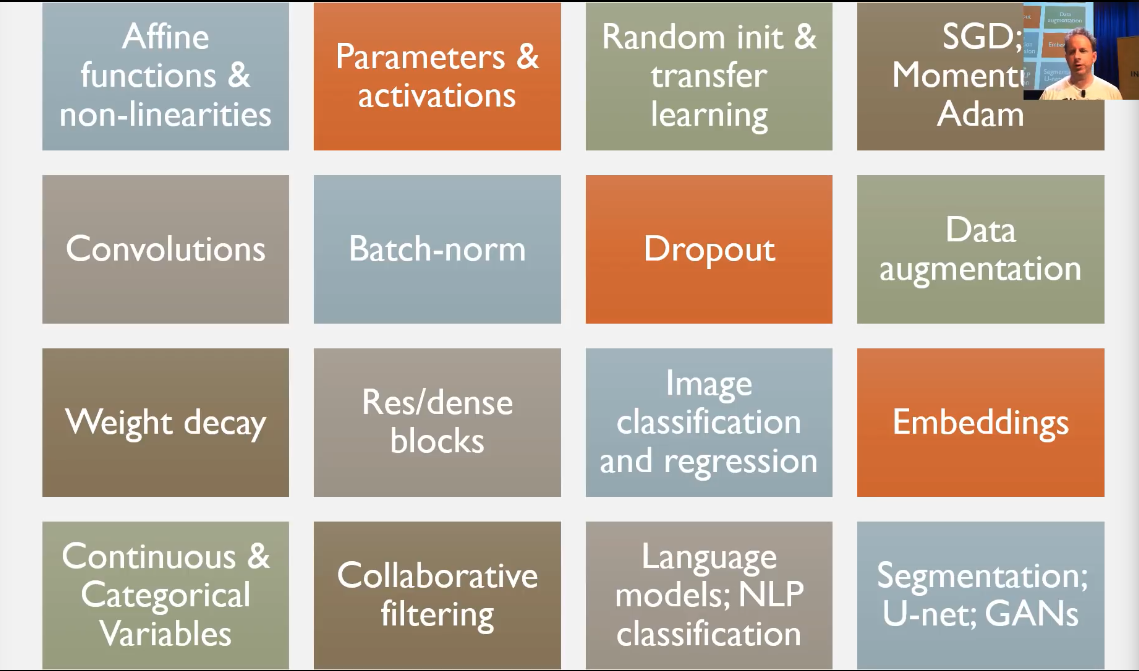 Watch the videos again and go through notebooks in detail to understand better.

Toy example dataset with numbers in English, the task is to predict the next word – language model.

data.bptt: bptt is backprop thru time 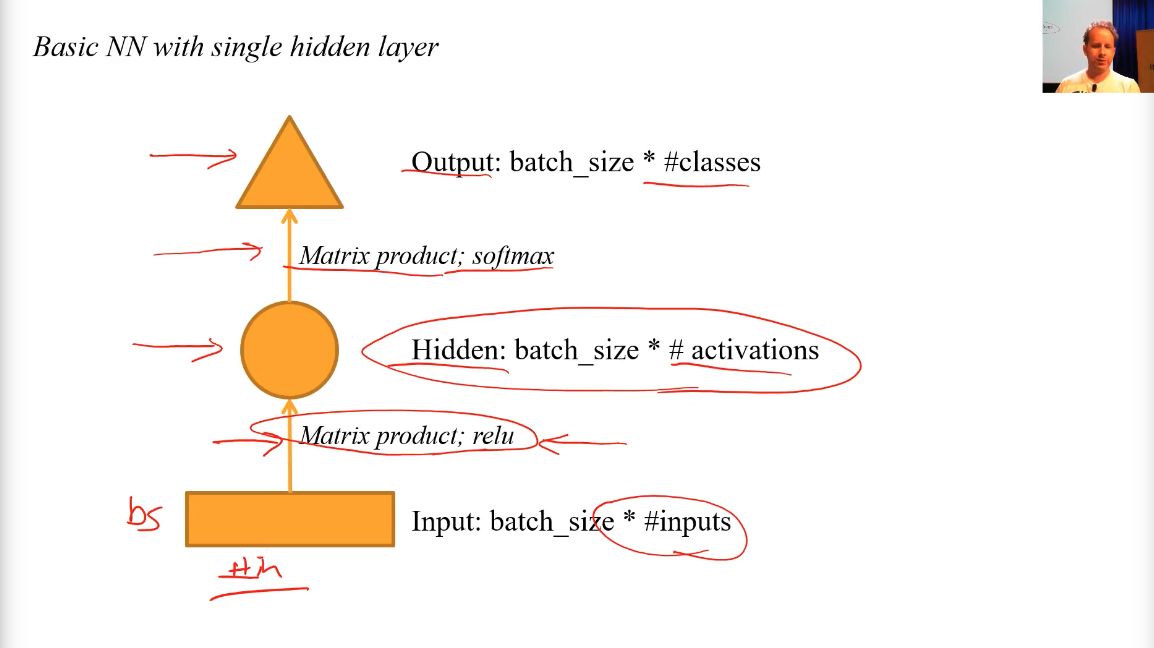 One step toward RNN 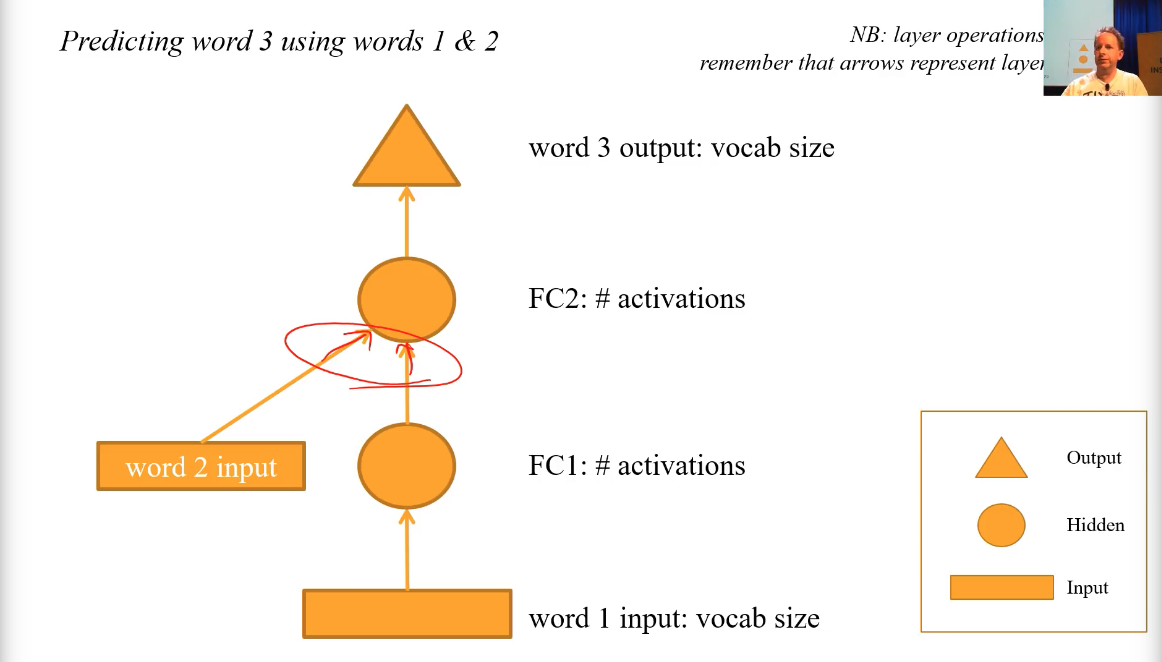 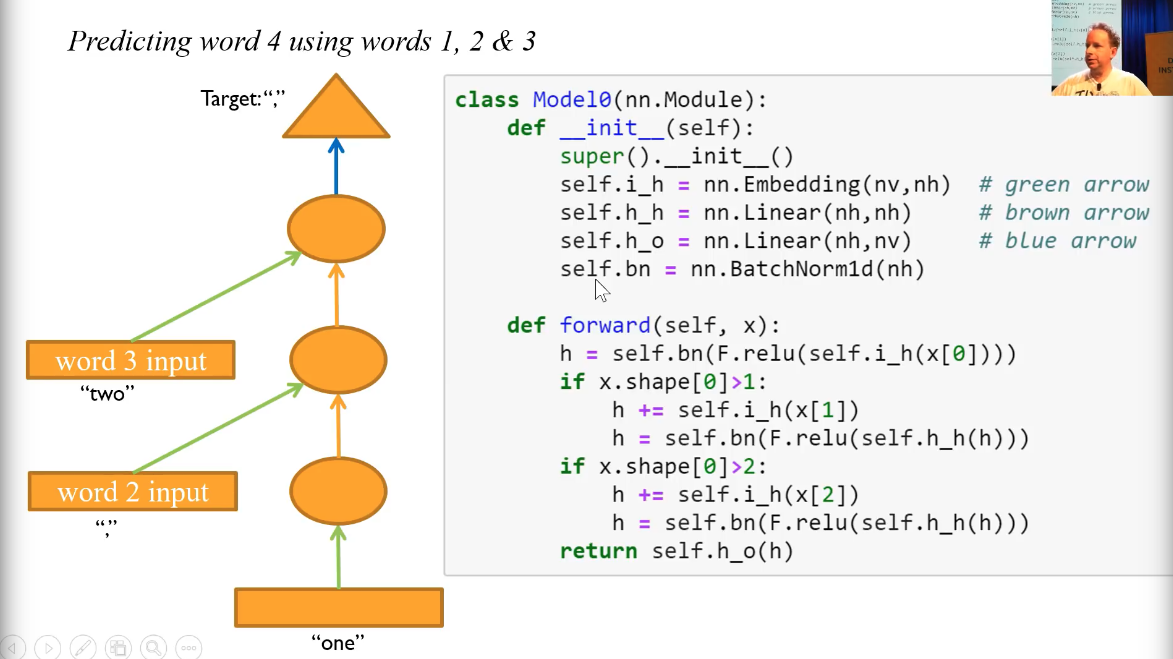 Refactor, make it a loop –> RNN 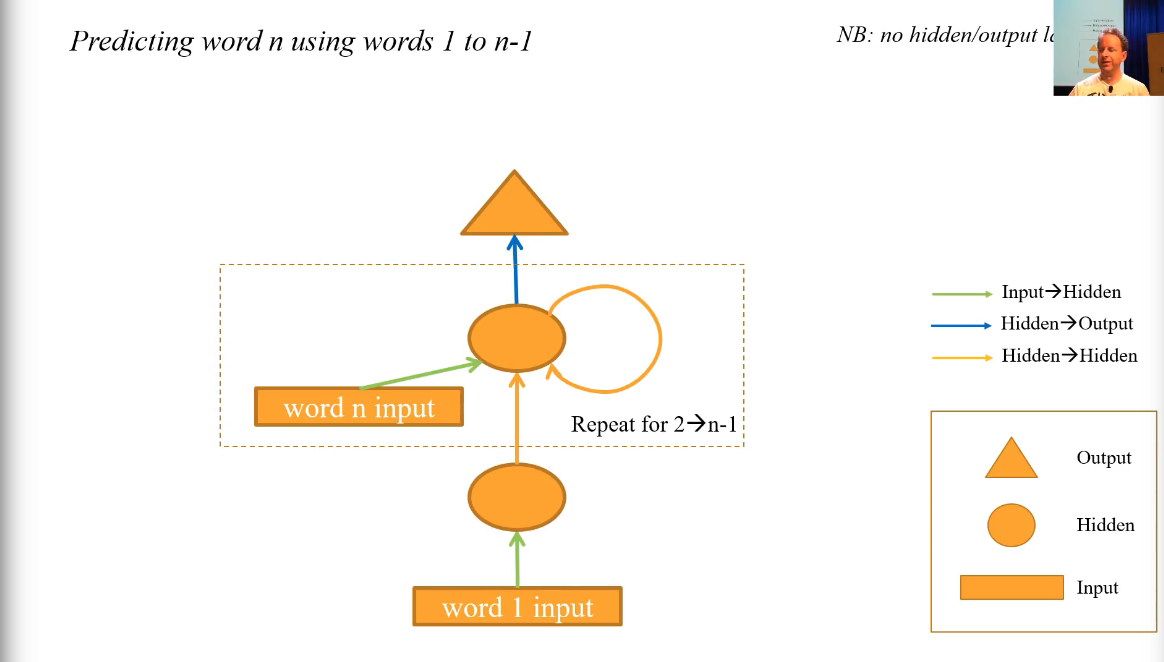 There is nothing new for an RNN, it is just a fully connected NN with maintained states. 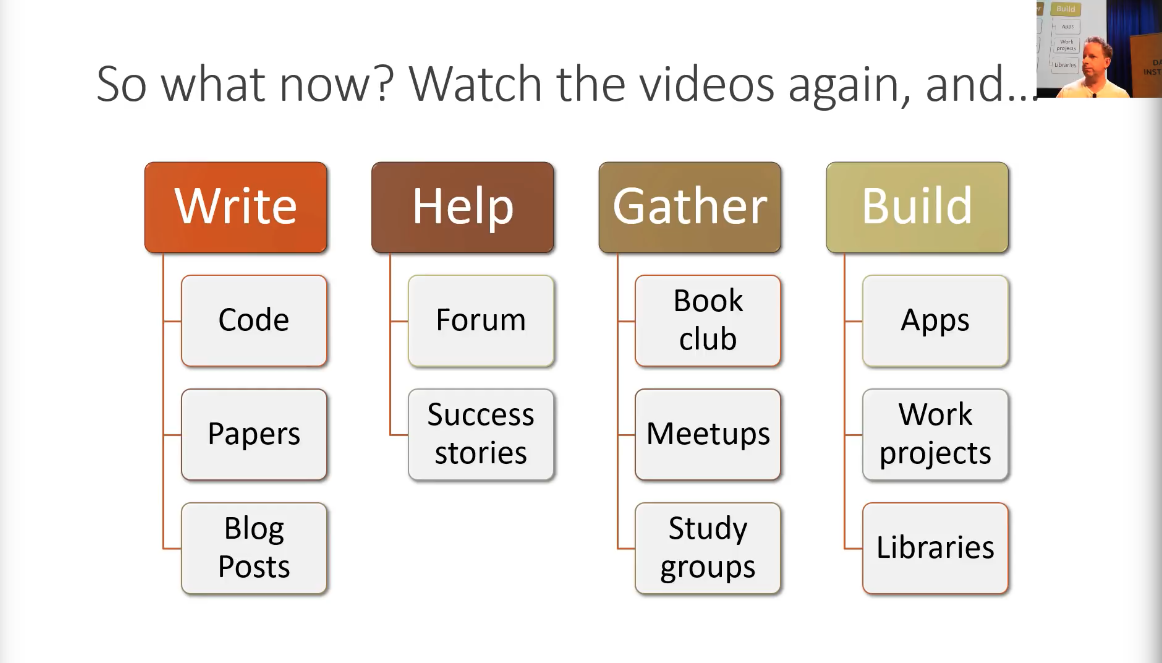 Answers and Comments from Jeremy